Jason Chan is shaking up the world of agricultural machinery 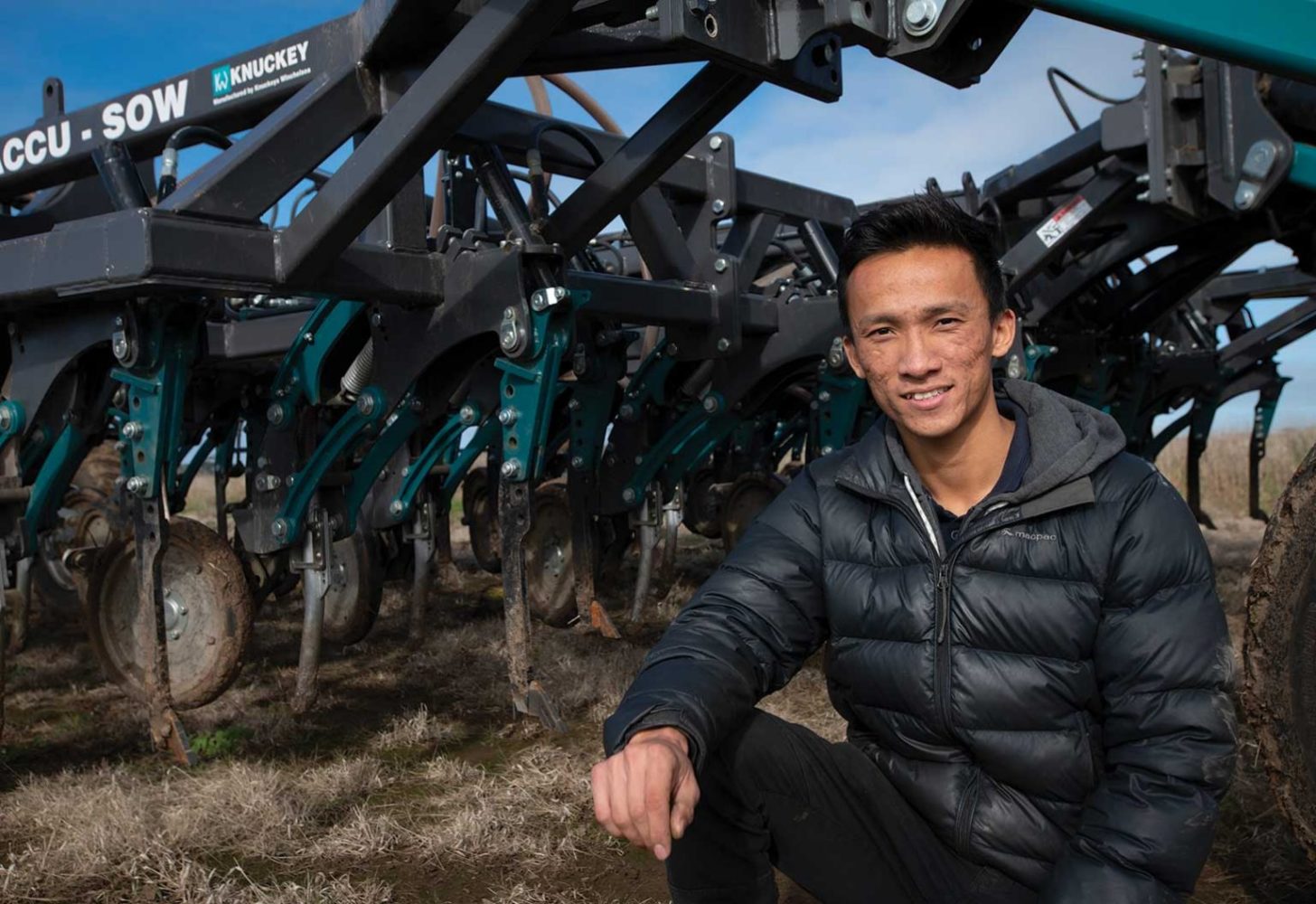 Jason Chan’s inventive thinking and technical creativity are shaking up the world of agricultural machinery.

Agriculture is one of Australia’s oldest industries, but some of the country’s youngest minds hold the key to its future success.

Mechanical engineer Jason Chan is a good example. For the past four years, Chan has worked at Victorian agricultural engineering operation Knuckeys, where he has designed award-winning machinery to solve agricultural challenges.

Now he plans to engineer a smarter future for the farming sector.

“At the moment, agricultural machinery is just lumps of steel with mechanically functional parts,” he said.

“We’re working on a couple of projects to implement sensors, AI and neural network stuff. We’re really trying to push to the future right now.”

Chan grew up in the Malaysian coastal province of Penang. His family are poultry farmers, but Chan said he “always wanted to be an inventor”. He sees his role at Knuckeys as a combination of his lifelong ambition and his farming heritage.

Chan joined Knuckeys as an intern while completing his bachelor’s degree at Deakin University. His manager, Steve Knuckey, a fourth-generation owner of the business, described Chan as someone “who’ll have a go at anything”.

“He’s happy to get his hands dirty,” Knuckey said. 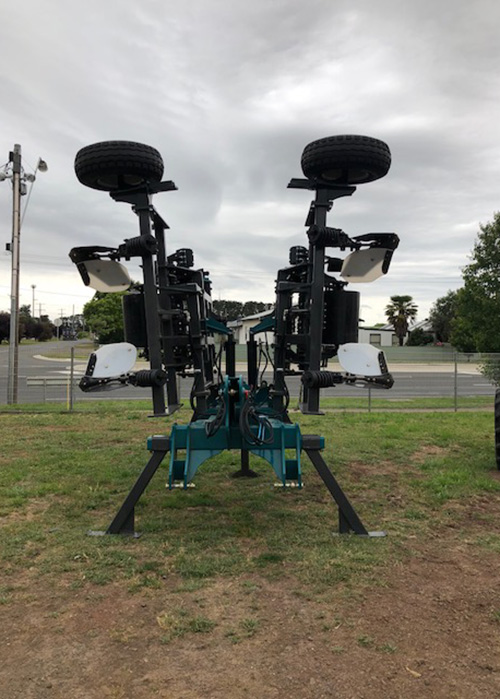 “He’ll work with a farmer to design something and then help the fabricators to put it together to make sure it’s designed as simply as it can be. And that’s so important, because you can get great designs out of some engineers and then think, ‘how the hell am I going to build it?’”

Knuckeys employs about 17 people at its Winchelsea operation and Chan is one of its five engineers.

His work includes the design of Knuckeys’ Controlled Traffic Manager, which fills the wheel ruts — or tractor “tramlines” — that are left in paddocks after a previous season’s planting.

“I think it’s my best machine, because it’s one of three similar machines in Australia,” Chan said.

Wheel ruts can result in uneven seed depth and a loss of crop yield. Chan’s design works by cutting and directing soil back into the tramline, before compressing, filling and flattening it to ensure a consistent ground level.

While similar machines have been designed that suit the sandier soil conditions of Western Australia and New South Wales, Chan designed Knuckeys’ Controlled Traffic Manager for a variety of conditions, including the rocky, volcanic soil of Western Victoria. “IT RENOVATES THE GROUND TO BE PRETTY MUCH NEW AGAIN.”Jason Chan

“Basically, it renovates the ground to be pretty much new again,” Chan said.

In 2019, Knuckeys was awarded The Weekly Times’ Machine of the Year for one of Chan’s designs: the Accu-Sow air seeder, which is a sowing system for broadacre cropping that provides depth control, spacing and precision seeding.

An air seeder is made up of a bin, which holds the seeds, and a bar, which plants them at a depth of about 400 mm via a series of sowing units. On an 8 m machine, for instance, there are about 36 sowing units across the bar.

Chan explained that his design “strategically places” the units to improve trash flow, which refers to the unobstructed flow of crop residue through the machine.

“When a crop like canola is cut and harvested, the stalks are left on the ground,” Chan said. “The next year, you’re ploughing through with such a tight spacing and it often ends up clogging the machine.

“We also brought the wheels to the outside, which leaves the middle part open and lets the material flow without interfering with your wheels.”

An outside wheel configuration would normally make the machine less compact for transportation, but Chan’s design ensures that the bar folds to a narrow 3.4 m.

“That’s how we won the Machine of the Year award,” Chan said. “There is no bridge frame air seeder bar out there that I know of that folds under three and a half metres.”

Another benefit is the machine’s versatility, Chan said. You can sow every type of seed efficiently by adjusting the sowing depth. For example, with canola, you want to throw it on top of the ground, whereas with wheat and barley, you probably want it about 100 mm in the ground to get a bit more moisture. The machine can be adjusted from paddock to paddock and from seed to seed.

“YOU CAN SOW EVERY TYPE OF SEED EFFICIENTLY BY ADJUSTING THE SOWING DEPTH. THE MACHINE CAN BE ADJUSTED FROM PADDOCK TO PADDOCK AND FROM SEED TO SEED.”
– Jason Chan

Farming of the future

Australia’s agriculture sector looks set to benefit from the Australian Government’s Modern Manufacturing Strategy, which will invest $1.5 billion over the next four years to make local manufacturers more competitive and resilient.

Steve Knuckey said agriculture has a way to go in harnessing smart manufacturing techniques, but that they will play a “big role” in its operations over the next five years.

His company is working with Deakin University to explore opportunities in areas such as robotic welding, additive manufacturing and materials innovation.

“Our biggest problem is capacity to build, so being 20 minutes down the road from Deakin is a great opportunity for us,” he said, adding that he has given Chan the remit to explore other sectors.

“We’re in the agriculture sector, but we will look at defence and health in the future,” he said.

“There are discussions of where we want to take the business and Jason is certainly someone we’d like to have with us, because he’s a ripper.”

“We’re still in the early stages where we are creating a map for what our future is going to look like,” he said. “To make our machines smarter, we’ve launched a couple of projects to make agricultural machinery a bit more [integrated with] the Internet of Things.”

Chan is excited about how technology can transform the sector.

This includes investigating the potential of precision seeding, Chan said.

“At the moment, the sowing depth is always determined by the farmer. What I’d like to see in the future is adjusting depth through sensors.”

Chan said Knuckeys is trying to make the process as lean and as streamlined as possible.

“We’re a small-to-medium sized company,” he said. “When we’ve achieved this, we’ll be able to look at implementing more smarts into machines.”

Over 100 years of serving the industry

In 1917, when Frederick Knuckey first established his blacksmith shop in Winchelsea in regional Victoria, he wouldn’t have
Read more

The Weekly Times Australian Machine of the Year 2019

Creating much excitement for Knuckeys and within the agricultural industry, our two latest release products have received international
Read more